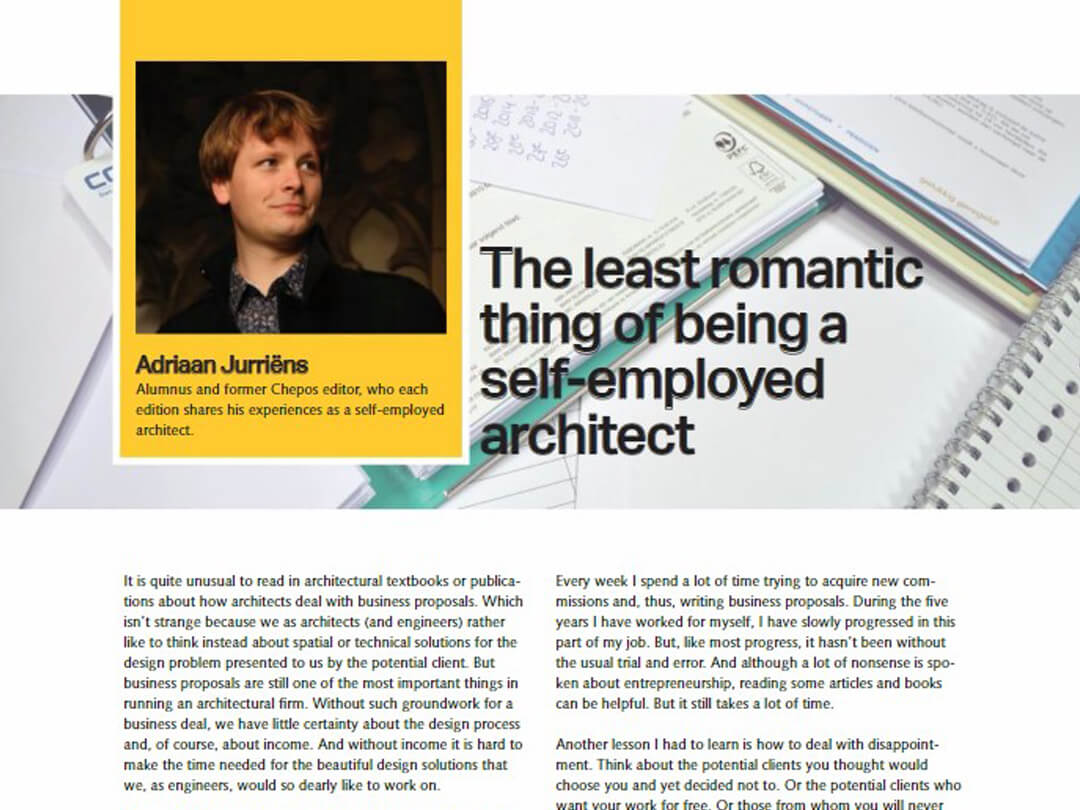 It is very unusual to read about how architects deal with business proposals in architectural textbooks or publications. Which isn’t strange because we as architects (and engineers) rather like to think about spatial or technical solutions for the design problem presented by the potential client. But it is still one of the most important things in running an architectural office. Without such a groundwork for a business deal we have very little certainty about the design process and of course income. And without income it is hard to make time needed for beautiful design solutions we as engineers would like to work on so dearly.

For clients the reading of offers isn’t the most uplifting part of the design process either. But a good business proposal offers them some certainty and clarity as well. Nevertheless it is something ambiguous: most people prefer the receive money then to spend it. As someone who is spending money you want to have certainty that the initial investment pays off in a clear added value by the design. Describing this added value is an important goal of the business proposal. For a client it is important to know what he will receive if he agrees with the business proposal. Besides all that most clients prefer to talk about the design instead of money, descriptions of the design process and conditions. Writing and judging business proposals stays a necessary evil where both client and architect spent no more time then strictly needed.

Still, the writing of business proposals takes a lot of time. Prior to the actual writing of the proposal is the process of acquiring new potential clients. Then at least one (mostly multiple) appointment to discuss the design problem and to see if there is enough trust to proceed with the collaboration. Then we can finally define the price and conditions. It is a delicate and time-consuming process. Anyone who thinks it can be standardized in some form is just fooling himself. Almost only dedicated and customized business proposals have a chance of being selected. No wonder almost all entrepreneurs spend a lot of time writing these proposals. For me as an self-employed architect it isn’t something different. No architect I know has the luxurious position of a constant flow of new commissions. For most bigger architectural offices to get these is even a daytime job.

For me as a self-employed architect things aren’t any different. Every week I spend a lot of time to acquire new commissions and thus also writing business proposals. The 5 years I’ve worked for myself I have slowly progressed in this part of my job. But like most progress it hasn’t been without the usual trial and error. And although a lot of nonsense is told about entrepreneurship, reading some articles and books can be helpful at times. But it still takes a lot of time. And another lesson I had to learn is how to deal with disappointments. Think about the potential clients from who you thought they would definitely choose for you and decided not to. Or potential clients who want your work for free. Or those from who you’ll never hear again after you had send the business proposal. It is annoying, but if you have been through this a couple of times you will forget it more easily. Also you’ll recognize particular potential clients who want to trick you in some way or another.

The most interesting perspective I once had came from a book about Renaissance architecture were the writer, an architectural historian, wrote about the economical motives behind certain changes in the architectural profession. And although it remained very abstract it was interesting that this topic was approached from an economical perspective at all. Since then I’ve read more publications by architectural historians where they also approached the architectural profession from the same perspective. As far as I know this subject is largely undiscussed in architectural discourse. And although lots of students complain about the lack of practical knowledge, I don’t think this is what they had in mind. No architect or engineer has started his education to learn about economical aspects. But with hindsight it wouldn’t have been a bad thing if necessary evils like writing business proposals are part of the education in becoming an engineer or architect. It won’t make writing business proposals the most interesting or romantic thing for an architect to do. But without decent knowledge of how to approach and write business proposals it is hard to work on those beautiful design solutions we like to talk and read about so much.  A decent business proposal is an important pillar on which a good design depends.